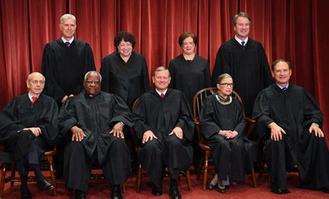 Which Group of People in Robes are the Most Racist? 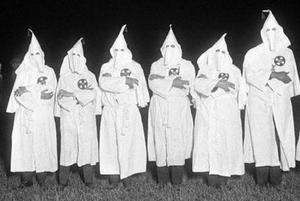 What happens when a Negro slave named Dred Scott escapes from his "Slave State" and makes his way to a :Free State"?  When his "owner" sued in State Court to assert his ownership, Scott's freedom was affirmed.  However, when his slave owner appealed to the U.S. Supreme court, Sandford left a slave once again.  The Supreme Court of the United States ruled the owner could not be deprived of his rightful property.   By ruling that Blacks were not U.S. citizens it deprived the Blacks of their 2nd amendment rights namely the right to bear arms.  The Supreme Court also ruled that Americans of African descent, whether free or slave, were not American citizens and could also not sue in federal court. The Court also ruled that Congress lacked power to ban slavery in the U.S. territories.  Many attribute this racist ruling for helping to start the Civil War.

Many do not see Roe v. Wade as a racist ruling but in its effect may be the most racist ruling by the SCOTUS.  In U.S. history, there have been approximately 4,000 lynchings of blacks.  Since 1973 black women, more than any other segment of the population have had over 16 million abortions.  Add to that how many of those would have had children and the true numbers are a significant part of the U.S. population, possibly in excess of 20 million lost Blacks American lives. Just to give you an idea of the genocide, that is equivalent to wiping out the entire population of Hong Kong plus Israel or half the population of Canada.   Because of Roe v Wade, instead of Blacks being approximately 13% of the population the numbers could be closer to 20% or more.  This would mean that the Black vote could control southern legislatures. Blacks comprise only 13% of the population of America but account for 37% of all abortions. Black women are five times more likely to abort than white women.  On average, 1,876 black babies are aborted every day in the United States.  The decision to abort is often economic and as we know Government policy and legislation put blacks at an economic disadvantage which leads to the high rate of abortions.

The Supreme Court ruled that judges were immune from law suits for damages. The legislative branch never gave the Supreme Court immunity.  Judges, legislating from the bench gave themselves the power to do pretty well what they pleased without any fear of consequences.  That meant that Blacks especially had little chance of justice in the courts as the Supreme Court gave them immunity meaning that Judges with racist or confederate leanings could do as they pleased with no fear of accountability or retribution.  This  action was brought by Joseph H. Bradley, who was, in 1867, an attorney-at-law, practicing in the Supreme Court of the District of Columbia, against George P. Fisher, who was then one of the justices of that court, to recover damages alleged to have been sustained by the plaintiff, 'by reason of the wilful, malicious, oppressive, and tyrannical acts and conduct' of the defendant, whereby the plaintiff was deprived of his right to practice as an attorney in that court.Issue.  Please see Taking Back Justice's legislation to take away immunity from Judges slated for the 2017 session of the Alabama State House.

The Federal prisons are full of a disproportionate amount of Black prisoners with the majority being incarcerated for victimless crimes namely narcotics violations.  All Federal narcotic laws are unconstitutional and illegal.  It took a constitutional amendment to regulate the sale and distribution of alcohol.  To repeal prohibition it also took a constitutional amendment  Congress overstepped it authority to regulate and criminalize drugs.  The "war on drugs", often referred to as the "war on blacks"  costs over 50 billion dollars.  It has destroyed countless  black lives and families.  The courts all the way up to the Supreme Court of the United States of America  refuse to find the laws unconstitutional.  Other developed nations prefer to spend the money on treatment, education and free healthcare and education. Although blacks are only 13% of the population they account for approximately 35% of the prison population and most of those are incarcerated for the non-violent victimless drug convictions.

A repeat of Bradley v Fisher to make sure that new Civil Rights legislation did not infringe on a Judges right to do whatever they please.  In other words, they gutted a major part of the Civil Rights Act, again legislating from the bench.  The U.S. Supreme Court extended the protection of absolute judicial immunity to suits brought under § 1 of the Civil Rights Act of 1871, 42 U.S.C. Section 1983. They ruled that that the legislative record for that statute gave no indication that Congress intended to abolish this long-established principle of absolute judicial immunity.  Thomas Jefferson warned us of the potential issue of Judges becoming legislators.  The effect of Pierson v. Ray was to effectively neuter President Lyndon Johnson's sweeping civil rights legislation. Please see Taking Back Justice's legislation to take away immunity from Judges and contact us if you want to play a part of pushing this bill in your State or Province.

This is one of the most controversial United States Supreme Court decisions on not only on Judicial Immunity but also in the history of the SCOTUS.  Remember, the immunity is supposed to come from the Legislative Branch, not legislation from the Bench.  In this case an Indiana judge was sued by a young Black woman who had been sterilized without her knowledge as a minor with accordance with the judge's order.  The Supreme Court held that the judge was immune from being sued for issuing the order because it was issued as a judicial function. The case remains one of the most controversial in recent Supreme Court history.

You cannot sue a witness who committed perjury in your case.  Clarence Thomas the only black Supreme Court Justice wrote the dissenting opinion.  In this case, a policeman was testifying and lied. It gave police immunity at trial to say whatever they want.  If we lie, it is illegal.   When police lie they are free from any accountability.  Basically police can fabricate evidence and lie to the court with impunity.  The legislators never gave the police nor judges this power. SCOTUS held   that Title 42 U.S.C. § 1983 did not authorize a convicted state defendant to assert a claim for damages against a police officer for giving perjured testimony at the defendant's criminal trial.  It is hardly any wonder why the jails are filling up particularly with Black convicts.

Everyone in the Judiciary wants immunity to not be held for crimes that would land you or I in prison.  The Supreme Court of the United States ruled that district attorneys or prosecutors were found to have full immunity from civil suits resulting from their government duties.
Imbler, a defendant in a murder trial, had been convicted and sentenced when the district attorney, Pachtman, revealed new evidence that he said had recently surfaced and which exonerated Imbler. Imbler used the new evidence to successfully free himself, then brought up a civil suit alleging that Pachtman had withheld evidence. The suit, however, was dismissed on the grounds that Pachtman had prosecutorial immunity, a finding which the Supreme Court affirmed.  A license for racist prosecutors to basically do what they want to get a conviction.

Did you know that the Supreme Court of the United States gave a  city can take over a black neighborhood?  Kelo v. City of New London, Connecticut  was a case decided by the Supreme Court of the United States involving the use of eminent domain to transfer land from one private owner to another private owner to further economic development. In a 5–4 decision, the Court held that the general benefits a community enjoyed from economic growth qualified private redevelopment plans as a permissible "public use" under the Takings Clause of the Fifth Amendment.

Convicted felons cannot have fire arms despite what the 2nd amendment states.  The first thing dictators do is to disarm the public.   If you are a felon, you no longer have 2nd amendment protection through the right to bear arm and therefore you cannot legally defend yourself or your family..

The Supreme Court legislates from the bench.  Not one of the above laws came from the legislative branch.  And congress, that has the power and control over the judiciary (any congressman can call a judge before congress or start impeachment even with a Supreme Court Judge).  Judges were never supposed to have power over the legislative and executive branch.   There is a reason they call judges "Politicians in Robes". If you want to get involved in judicial reform, please contact us at TakingBackJustice.com