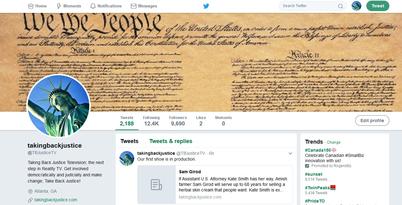 Taking Back Justice features cases mostly by self represented litigants or defendants that are striving to Taking Back Justice.  Their legal work is online for those who want to understand their struggles and victories through the court record.  Some of these cases will be Taking back Justice Reality Shows

Wrongful Arrest & Defrauding the Taxpayers:  Hard to believe what a Victoria Detective would say under oath.   Victoria Police Department, The City of Victoria, Mark Knoop and Cory Moore

Alabama - How to Sit on a Jury

This is one of the last vestiges where people have more power than a Supreme Court Justice.  Few know the power one has in being a Juror.  Judges however do understand and more often than not do anything and everything to disempower and control Juries.  Please see our Jury Nullification Legislation.

Florida - Global MLM Company goes Rogue
We are monitoring a global Multi-Level Marketing company with offices in Miami.  They had a product that never made it to market and have been hesitant to give full refunds.  Much worse is they guaranteed income on one of their failed products.  We are waiting to see if they  take the legal and ethical route if not, they will be the topic on one of our Taking Back Justice Reality Shows

Kentucky - Herbal Assault by Judge Reeves
What do you get if you make a herbal skin cream out of ingredients like rosemary, beeswax, peppermint, chickweed, eucalyptus oil, olive oil, lavender oil, and comfrey and sell it to willing customers?  Six years in a Prison.  This is the new war on drugs by prosecutors and judges that allow Drug laws to be applied to herbal cures.  See the role of Big Pharma and elected officials in this new assault on Freedom.
Minnesota - Divorce Court Federal RICO
What do you do when your soon to be ex and the government break the laws repeatedly?  Take it out of family court and drag the bunch into Federal Court on a Racketeer Influence Corrupt Organizations Act action.  This also may be one of the most important "RACE" cases in America today.  Over ten years of documented abuse by Government and it's agents proving that people of color, regardless of laws, are still not treated as citizens of the United States.
New YorkPlea Bargain Dungeons
Rogue U.S. Assistant Attorney: Racketeer Influenced and Corrupt Organizations Act (RICO) alleging criminal behavior by DREW JOHNSON-SKINNER, a U.S. Assistant Attorney in the Southern District of New York who used torture to get a plea agreement.  We look at two cases where the Prosecutor worked with the Judge who denied all pre-trial motions to force the accused into admitting guilt in some cases to save their life from the dangerous and despicable conditions in the Plea Bargain Dungeon prisons.

The war on the Family continues and children are the biggest losers.  Family court judges regularly overstep their authority and trample on the civil and constitutional rights of those in family court, mostly males.  Federal judges, nor the legislators or the people, decided that family issues have no place in federal courtrooms. (Domestic Relations Exception)  However, family court judges and prosecutors, when they trample on the constitutional and civil rights, no longer are just addressing a family matter.  It is a matter of the judges and prosecutors bypassing the lawmakers and thus the people, creating their own laws and social engineering from the bench.  This is a very important case to watch.

Ohio - Mike DeWine vs The People of Ohio
A select number of cases that demonstrate why Ohio has often been cited as one of the most corrupt states in the Union.   Do we make the case that Mike DeWine is unfit to hold public office?  You be the judge and if a guilty verdict is mandated, participate judicially and democratically to Take Back Justice in Ohio.

Ohio - Illegal Foreclosures
A RICO has been filed against Ohio Judges and others who allow financial institutions to foreclose without title.  The Attorney General, Michael DeWine is defending the judges rather than investigating and prosecuting them.

Cases and TBJ-Television Legislation to Watch

In Production:  Friends and family of those with felony convictions have more than enough votes to fully restore the second amendment.  This show documents the fight!

We have several Canadian co-production partners to help us produce Canadian versions of our Taking Back Justice Reality televisions shows.  We also have distribution through many channels.  Please see our Press Room